“I am writing a piece on Bansky” says the Japanese journalist interviewing me. “What is it about Bristol that makes it home to all these things?”

I am in Japan for Media Ambition Tokyo—to help install Chomko & Rosier’s Shadowing—which won Watershed’s second Playable City Award. It is the fourth time I have visited Tokyo in the last 12 months, and another exciting step forward for Playable City Tokyo, which we are developing with British Council, Rhizomatiks, Wired Japan and Mori.

So what is it about Bristol? It’s no coincidence Bristol is home to a lively street art culture, an alternative currency, its own ‘sound’ and also to Playable City–where we employ the same unorthodox approach that runs through all these things, to intervene in public spaces and engage people with the ideas and technologies of the future city.

Back in October I was in Japan to collaborate with local creatives on new Playable City ideas. This time we are sharing a project that has probably taught me more about what a Playable City is, than any other.

Shadowing gives memory to a city’s lights, enabling them to record and play back the shadows of those who pass underneath. As the sun sets, the Shadowing streetlights start to capture the movements of pedestrians passing beneath and echo them back as shadows, leaving a glimpse of those who walked the same path moments before.

A key part of Shadowing is its invite, gently, magically, sometimes ominously, it both invites people to step into the light and play and but also to re-consider the space they are in–often one they pass through regularly. People break out of their normal behaviour, to play with people they don’t know, to contribute a wave, a dance, the shadow equivalent of a snow angel. 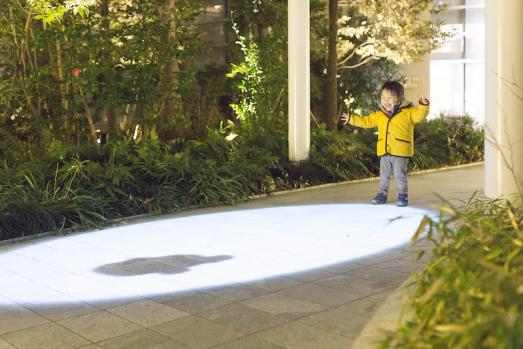 Shadowing is a collaboration between artist and audience which feels very different in different cultural and spatial contexts. The shadow library of Bristol has interesting differences to that of York. How will Japanese people play? Toranomon Hills, its Tokyo home, is certainly a more modern space (and home to many office workers) than it has been in before.

Cultural stereotypes paint Japanese people as reserved, and yet my experience is one of friendliness and humour. From the musical chaos of Shibuya crossing to the high tech energy of the gaming spaces, I have a hunch that Tokyo will take to Shadowing with a kind of kawaii gusto (the rest of the team will blog an update when it is formally launched).

Playable City had its birth in Bristol but as it grows and flourishes, it is the global conversation and collaboration that gives it meaning. The madness of taking three Bristol lamp posts to Tokyo and giving them life is a perfect next step in a global invitation to people to engage with their city in a new way.

Shadowing by Chomko & Rosier is part of Media Ambition Tokyo which takes place between 26 February to 21 March 2016 across the city. Three Shadowing lamp posts will be installed in Toranomon Hills, hosted by British Council and supported by Rhizomatiks, Toranomon Hills and ADK.