The Toronoman area is dominated by a huge glass tower that cuts a fine jib into the blue Tokyo sky. Mori’s Toronoman Hills building contains offices, restaurants, cafés and conference space – and has been the home to Playable City Tokyo – triggering questions around how playful experiences can engage people to look anew at a space. 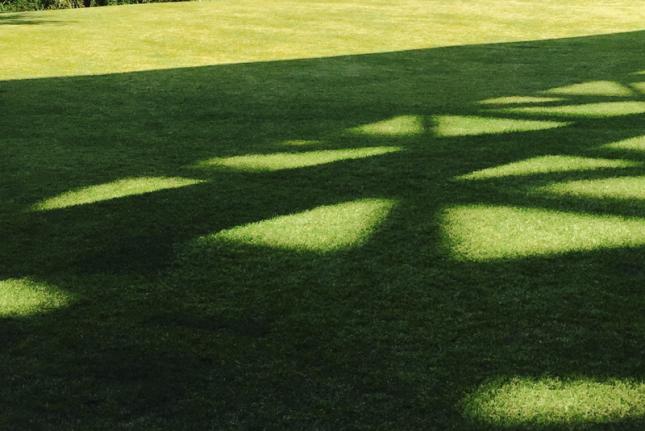 The Toronoman area is actually much more than glass and steel – the back streets contain houses, shrines, shops and parks. Its name means tiger gate (as it sits in the direction of the tiger) and it is also the gateway to what will become a kind of avenue of the Olympics – leading people down to the harbour and the 2020 stadium.

Over the last two months, our Playable City community have been exploring, documenting and imagining the future of this area, and this weekend we developed the thinking in a Playable City Lab. 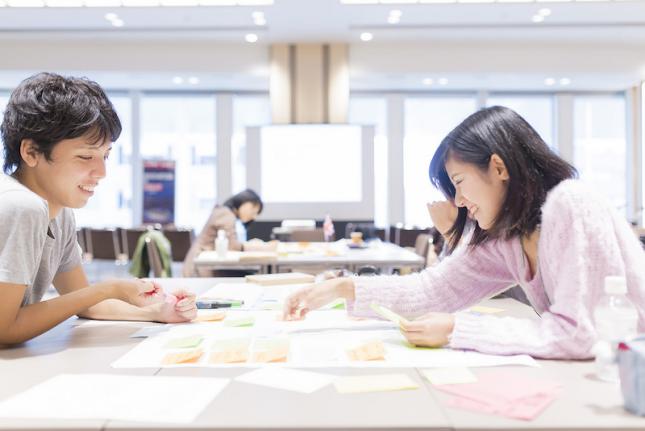 Back in April we came out to Tokyo to introduce the idea of Playable City – by staging Pan Studio’s Hello Lamp Post as part of Roppongi Art Night, presenting the concept in a panel discussion and staging a mini workshop (more of that here). The idea (thanks to the hard work of the British Council Japan Arts Team and Seiichi Saito of the amazing Rhizomatiks) has quickly gained traction and support –so in September we embarked on a series of workshops to build a community of artists, technologists, students, companies and brands who could begin to author Japanese Playable City experiences.

We designed three workshops to take place over a month, inviting participants to undertake field-work to really understand the area, the people who live and work there, and the Playable City idea. 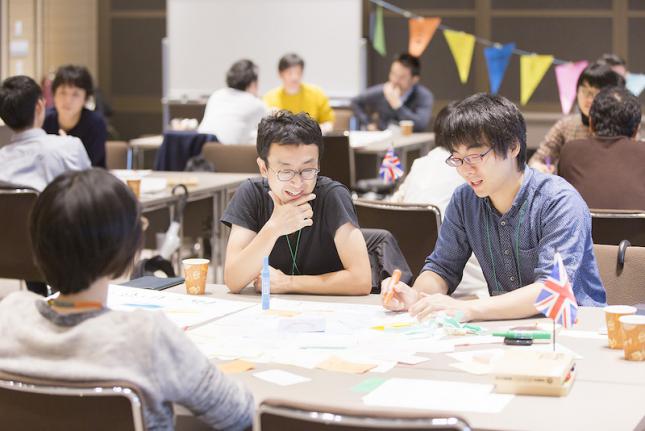 Watching the workshops that we co-designed become a reality through Facebook updates, was a strange and wonderful thing. On the last one, the participants were so engaged they staged an impromptu midnight picnic on the Toronoman Hills lawn – a delightful act of surprising intervention that gave me great excitement for my trip.

With the programme gaining momentum, I arrived in Tokyo last week and dusted off my jet-lag addled brain to undertake a city safari – familiarising myself with the area and searching for inspiration for the two day ideas lab. As I walked the streets an idea began to surface – one of the problems of quickly translating Playable City is that people quickly get excited about play in the city, and the concept aims to be much more than that. How then to ensure the projects create impact? That they engender moments of surprise? That they connect people to each other and the city, by re-using city infrastructure in unusual ways? 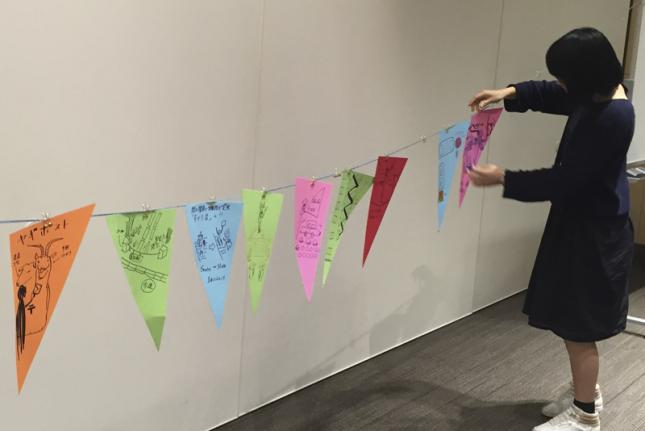 Walking the city, I mused on what it is like to be abroad – how many things in cities look the same – but small differences lead to surprising experiences – because as a foreigner you don’t know the rules or how to behave. Perhaps this was the key to designing Playable City experiences in Tokyo?

Twenty of the Playable City Tokyo workshop participants signed up to participate in our two day ideas lab – taking place over a weekend in Toronoman Hills. The event bought together artists, architects, landscape designers and technologists, and featured industry participants from Honda Lab, NEC and Fujitsu – as well as our partners Rhizomatiks, Wired Japan and Mori. 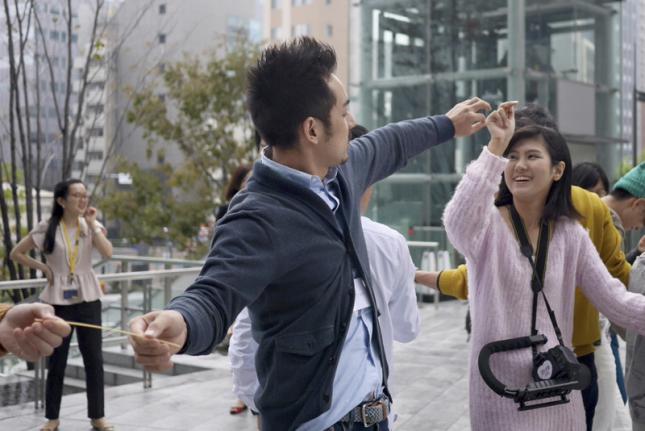 After warming up with some outside play, we started thinking about surprise – first by marking on a map places we had visited in the world, and sharing what surprised us about them. From a power cut in Niagra that allowed the stars to shine brighter, to a tall bench in Russia that made Japanese people feel like children – the stories shared were funny and touching.

We next took that thinking and applied it to the city – what was the most surprising thing we could think of a city object doing? Maximum magic and minimum rules applied. From hungry post boxes to pervasive city mud – the ideas here may have seemed fanciful as we hung them like bunting across the room, but they provided a rich seam of inspiration from which to begin. 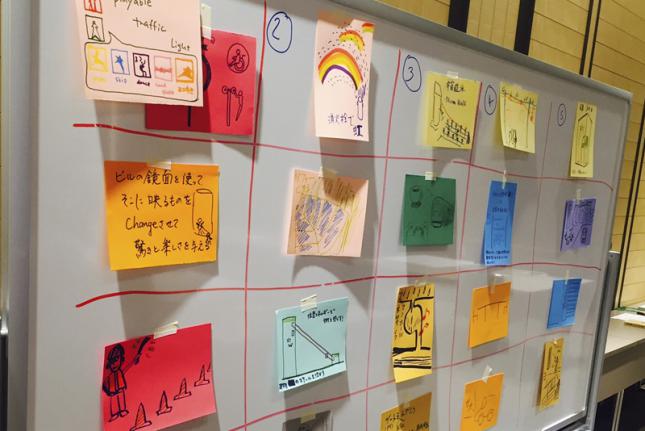 What followed over the next two days was a programme of shared idea generation, iteration and collaboration that took the 20 ideas that were generated through open space down to six original, magical and possible Playable City Tokyo projects. With regular breaks to go back out in the city, inspiration questions (modelled on those in the brilliant ThinkPak e.g. if Muji re-designed your project, what would they do?) and a final showcase to share ideas with colleagues from Mori, Wired Japan and Rhizomatiks, we have some rather brilliant ideas that we will now take forward to find further support for:

Toronamon is full of road works as new Olympic avenues begin to appear. How do we stop people feeling grumpy about them, and give construction workers some fun? Interactive traffic cones are controlled by the construction worker cone conductor, lighting up in sequence as they wave their baton. The cones are completely controllable and re-programmable for holidays and events like Halloween. 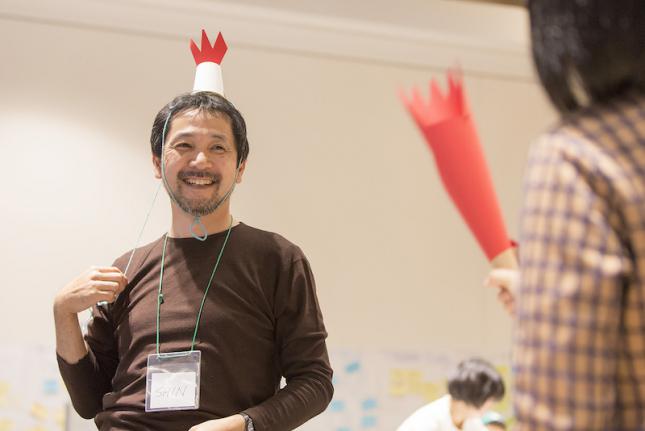 See a feline tail disappearing around the corner, smell a rich animal musk on the sidewalk, discover glowing animal prints and hear the roar of a hire-care horn. Invisible Tiger uses the Toronoman name to create a unique identity for the city and a sight-seeing adventure for people entering the area for the first time.

Toronamon is full of rules about what you can and can’t do – so can we introduce new rules of play? Traffic crossings become interactive with playful signs that are triggered as people step onto crossings together. “Look at the stars”, “start to stretch”, “talk to your neighbour “– the sign/invites change depending on the time of day and are designed to energise tired office workers and even encourage love. 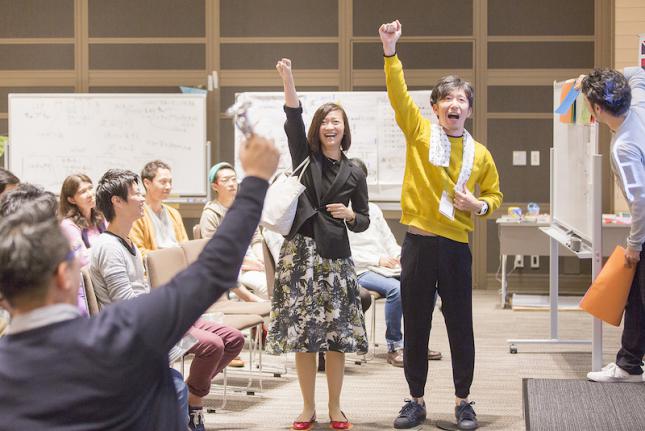 Re-appropriating unused telephone boxes as places to play –  from shout box for frustrated office workers, to laughing box containing networked contagious giggles, these intimate spaces are turned into interactive barometers which light up in panels to visualise the depth of engagement.

One you step inside an office elevator, everyone becomes quiet – how can we use these precious moments to join people through play? Step into an interactive lift with a projected floor – asking users to collaborate to answer questions collectively (moving themselves into the yes or no floor areas) or responding to conversation prompts. Plus, for those on the way down – Collabovator features a freefalling elevator sound – adding mischievous laughter to the end of the day.

The Mirai mirror blends the future facing architecture of Tornamon with its Edo past. As you walk past the mirrored façade of an ordinary looking office building, you are placed in a historic Daimyo Gyoretsu procession and fellow travellers appear next to you in parade. Unexpected and magical, the Mirai mirror engages visitors and workers with the history of Tokyo, asking them to look anew at this mixed up site.

The two day workshop felt like a very brilliant rollercoaster – participants had huge energy and generosity, and I learnt loads that can be applied to the other Playable City projects we have in development around the world. Perhaps the most humbling and gratifying part of it all, was how the participants responded to the process – collaborating on ideas with people from other sectors was new to most of them – but they took to open innovation with gusto and an active and engaged network has been built quickly.

We are now looking for support to make these Playable City Tokyo ideas happen – starting with presenting them at Mori’s Innovative City Forum this week. However their development pans out – I am quite sure some special collaborations will come from this group in the future. 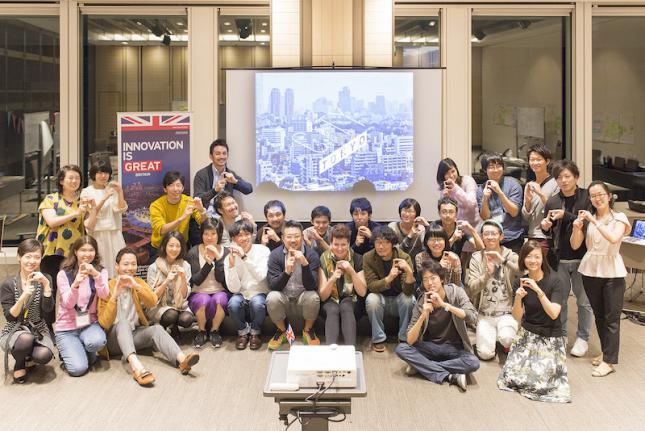