It has been another very exciting year for Creative Producers International. One of the major highlights came in the autumn of last year, when our fourteen Creative Producers travelled from all corners of the globe to unite in Tokyo for our second lab of the programme. Here’s a look at what we got up to.

As well as the lab, we held our first Making the City Playable Conference to take place internationally and a skills exchange day between our cohort and a group of Japanese producers. Here are some thoughts about the trip from CPI Producer Pete Vance:

Coming together again a year after our first event was extremely exciting, particularly the opportunity to share this experience in a city we had heard so much about from our own CPI participant Bruce Ikeda. It was amazing to see that the bond we have cultivated among the CPI cohort was as strong as ever. 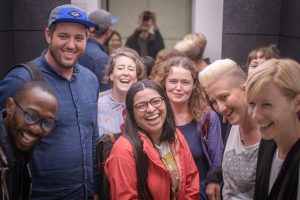 Tokyo provided a brilliant backdrop for some fascinating explorations within the group. A major aim for the lab was to explore what it means for creative practitioners to work internationally, and for the producers to reflect on their own practice from this perspective. Thinking about making change (which is a daunting task at the best of times) and connecting to a local perspective in an unfamiliar city was a difficult undertaking. To help us do this, it was incredibly useful to hear from Japanese practitioners, including Bruce, who provided us with real insight into the considerations and challenges of working in the city. Connections like these helped the group feel confident within their surroundings and motivated to return to their cities to think about how they might apply the lessons they learned in Tokyo to their own work. 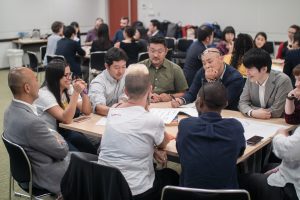 Our Japanese colleagues also helped us to continue our conversation about the role of the Creative Producer and what this means in different cities around the world. It became clear from listening to Bruce and Miyuki Tanaka (a brilliant local independent Creative Producer), and from the workshops and discussions during an exciting producers’ skills exchange day, that there is a sizeable gap between the value placed on this role in the majority of our participant cities and the lesser importance it holds in Japan. It demonstrated how valuable opportunities for international exchange of knowledge and experience are, and how this programme has encouraged experimentation, new ways of thinking and highlighted the value of producers within creative projects.

Our time together in Tokyo also inspired the some very honest and vulnerable sharing between the group. In a powerful moment Malaika (Lagos) and Russel (Durban) spoke frankly about their experiences in the city as people of colour, and the how their sense of otherness is something they experience both at home and abroad. This was incredibly poignant, particularly as the entire group were experiencing some degree of ‘foreignness’ in a vastly different city, and led to a moving discussion about perspective and privilege that had a strong impact on all of us. This conversation typified the incredible moments that have resulted from this group of people coming together, and is testament to the level of affection and respect that has grown among them over their time on this programme. 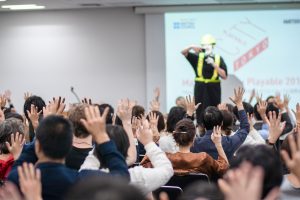 At the end of the week we held our first Making the City Playable Conference to take place outside of the UK. The conference aimed to explore how we engage with play in the modern world, how we can learn from practitioners creating playful work in different contexts and look at its potential importance in the future of our cities.

It was a fantastic event and we heard some truly inspiring talks from a mixture of Japanese and international creatives making playful work in their cities. Our Creative Producers were tasked with designing some playful workshops to lead in public space for our conference delegates; team Uchujiin created a guided walk around Tokyo streets from the perspective of an alien visitor and team Hack the City asked people to reimagine the use of public space by creating temporary playful structures. The heavy restrictions around the use of public space in Tokyo meant these ideas had to be rethought a number of times throughout the design process. This was a brilliant education in adapting to produce work within the rules of a different city context. 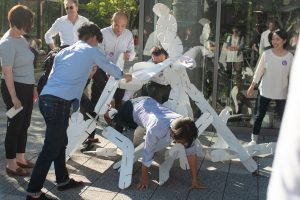 We will have more updates on what our fantastic CPI cohort have been getting up to very soon.