This week, Playable City Award 2014 winners Chomko & Rosier have been installing Shadowing in York, produced and presented by Watershed as part of the fantastic Illuminating York festival 2015.

As the dusk fell last night, Jonathan Chomko, Matthew Rosier and I loaded the specially refurbished Shadowing street lights into a van with a bucket lift on the back, and set about installing these magical lanterns into seven locations around the city of York. 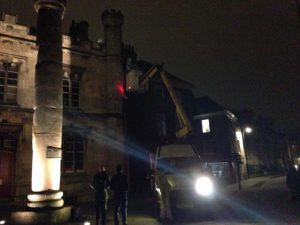 For those unfamiliar with the piece; Shadowing gives memory to a city’s lights, allowing them to capture and play back the shadows of those who pass underneath, and sharing traces of those who travel the same path as you everyday.

To give you a sense of how it works (apologies for blurry iPhone camera work), here is brilliant City of York Council street lighting expert, Mark giving us a demo!

Almost as soon as we started to rig Shadowing in York, it’s citizens came out to play with us. We had a lovely moment where a little boy giving his sister a piggy back thundered over to see what we were doing and the two of them proceeded to make shapes, dance, play and turn cartwheels in the lamp light until we sadly had to move on. 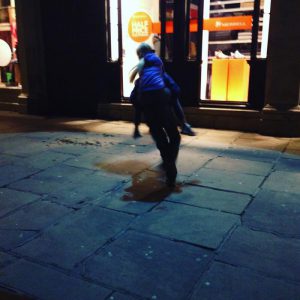 We have so far installed four of the seven Shadowing street lights in York, with the rest going in tonight, and I personally have been struck by something unexpected:

In Bristol, Shadowing felt like a view of a possible future, with discussion alternating between the joys of acting differently in public, to concerns about the increasing presence of surveillance in our public spaces.

York by contrast, feels drenched in a sense of deep history, from Roman columns dating back to 71AD to streets like The Shambles, where wattle and daub houses lean forward over a narrow cobbled street that was never intended for anything wider than a portly horse. Here Shadowing feels like a time machine, able to loop you back in time as a shadow to commune with history. As you leave your own trace, York’s imposing architecture leaves you powerfully aware that you are treading a path of uncountable ancestors, wearing at the ancient stone with your feet as they did with theirs over and over again. It was not lost on us that we were installing a kind of time looper on Back to the Future Day (woah, this is heavy).

It is a total pleasure to see Playable City projects such as Shadowing finding new lives and new resonance in cities around the world at the moment. I cannot wait to see what the people of York make of it when Shadowing opens at the launch of the Illuminating York festival next Wednesday.

Shadowing by Chomko & Rosier, and produced by Watershed, is one of seven lead artworks commissioned by Illuminating York and Make It York. It will run after dark throughout the Illuminating York festival 28 – 31 Oct 2015, and will remain in York until 31 December 2015.