As night falls on all hallows eve, and the grizzly ghouls of Bristol crawl out from the shadows, eight haunted street lights await you. These bewitched streetlights will capture you as you creep underneath them and echo back your shadow to the person who follows in your footsteps.

Send us your best Halloween pictures and films of you playing in the Shadowing lamp light. If you are out trick or treating, why not visit your nearest Shadowing street light and a take petrifying party portrait? 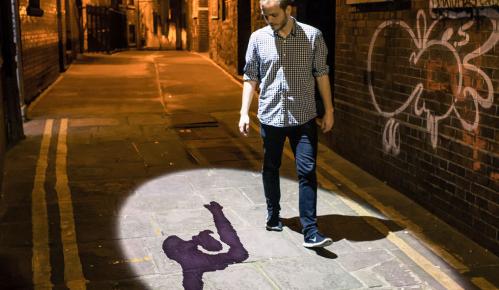 What spooky surprises will you find lurking in the shadowy corners of the city, and what treacherous trace of terror will you leave in waiting for the next unsuspecting victim?

We will reward the best pictures/movies with a night out at Watershed: two tickets to a film of your choice, plus dinner and a drink on us.

Winners will be announced Monday 3 November.

Shadowing, by designers Jonathan Chomko and Matthew Rosier is the winner of Watershed’s 2014 Playable City Award. It has been installed in eight locations around Bristol, UK from 11 September – 31 October.

To find out more, including a map to help you track down the eight street light locations, visit shadowing.cc