At the invitation of the Brazilian Independent Games (BIG) Festival’s social impact strand, we produced a Playable City panel and workshop in São Paulo – part of our desire to expand activities in Brazil.

As we found in Recife, the core concept of Playable City seems to chime well with a Brazilian interest in architecture and urban space, a more radical collectivist idea of public intervention, and a public policy desire to drive creative economy impacts in the city.

During the workshop (for which we were oversubscribed, 120 applications for 40 places) some themes which emerged were familiar from other cities, for example, perception of safety or people flows, where others were very much a product of a sprawling mega-city: identity and belonging in a diverse city, scale as a challenge in connecting the citizens.

What was interesting was how the participants – architects, artists, designers, city government, development agencies – immediately understood the concept and generated positive and practical responses.

Partly this is an understanding built on an existing and very active public art scene – from graffiti to LED covered multi-story buildings.

A couple of great examples:

or
Guto Requena’s Light Creature – a responsive building which interestingly was hacked to turn it from red to blue via the public app as a political statement during a protest.

A more simple intervention was at the BIG venue, the Centro Cultural São Paulo, where the glass was semi-mirrored and groups of kids practised dance routines day and night throughout the public spaces in a totally unstructured but energising way. 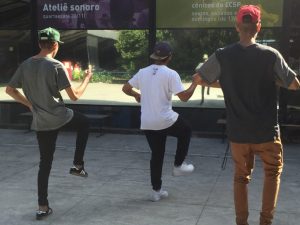 We were delighted with the response to Playable City at BIG and in planning for further activity in São Paulo. We have key production partners in the city and are building partnerships and support around a Playable City São Paulo plan for 2018/9.

Could you be a Playable City?

Get in touch and join the conversation

Have you an idea for a project?

Find out more about the Playable City annual Award