Austin is the state capital of Texas, an inland city bordering the Hill Country region. Home to the University of Texas flagship campus, Austin is known for its eclectic live-music scene centered around country, blues and rock. Its many parks and lakes are popular for hiking, biking, swimming and boating. South of the city, Formula One’s Circuit of the Americas raceway has hosted the United States Grand Prix.

Playable City Austin activities are co-produced by Watershed, the Cultural Arts Division of the Economic Development Department of the City of Austin.

Shadowing is currently live in Texas as part of an extended programme of Playable City Austin Events, leading up the Unesco Media Arts Exhibition with SXSW.

Hello Lamp Post brought s to life the hidden stories of Austin by finding out what the street furniture had to say in 2015. Get talking to familiar objects around the city using text messages.

Created by London based Pan Studio, the project has been commissioned by the City of Austin Cultural Arts Division of the Economic Development Department in celebration of the Art in Public Places program’s 30th anniversary year, and in partnership with Art Alliance Austin. 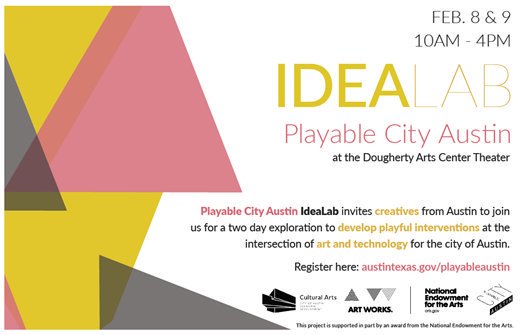 As part of Playable City Austin 2018, Playable city hosted workshops with both the Austin Government City Administration and employees In the Idealab, for two days we explored Austin as a Playable City, with a cross-section of creatives from the city.

Matthew Rosier, a British designer, has a background in architecture and urbanism.

Jonathan Chomko is an interaction designer. His primary focus is the design of compelling interactive experiences.

Shadowing gives memory to city street lights, enabling them to record and play back the shadows of those who pass underneath.

The National Endowment for the Arts is an independent federal agency that funds, promotes, and strengthens the creative capacity of our communities by providing all Americans with diverse opportunities for arts participation.

The NEA works with more than 20 other federal agencies, state and local governments, state and regional arts agencies, and private nonprofits on projects that provide opportunities for Americans to experience quality arts programming throughout the country.

The Cultural Arts Division of the Economic Development Department provides leadership and management for the City’s cultural arts programs and for the economic development of arts and cultural industries.

The Cultural Arts Division is responsible for the Cultural Arts Funding Programs, Art in Public Places Program (AIPP), community-based arts development, and programs to assist the development of creative industries in Austin, as well as initiatives designed to support and encourage the community’s unique cultural identity and vitality.

Could you be a Playable City?

Get in touch and join the conversation

Have you an idea for a project?

Find out more about the Playable City annual Award