Ten years ago Watershed began Playable City, seeking to put people and play at the heart of the future city. After taking some time to reflect on how the world has changed, we are delighted to be launching our first UK Playable City Commission since 2016, giving six teams the opportunity to receive up to £45k each to develop a prototype. 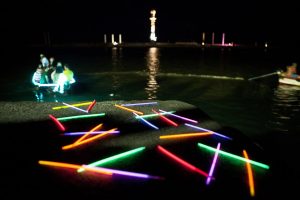 Playable City began in 2012 right here in Bristol and has become a global movement of playful city interventions using innovative technology to connect people to each other and the places they live and work.

It’s all about connection, community and people – empowering people to reconfigure their city’s services, places and stories to animate the city, to bring joy, to interact, to surprise and to entertain.

Playable City has reached across five continents and nine cities, from Lagos to Recife, Tokyo to Melbourne and Singapore to Austin. Commissions have seen audiences share secrets with postboxes, dance with their own shadows under lampposts and jump with origami-like rabbits projected onto pavements.

Pushing the boundaries and encouraging experimentation, Playable City sits at the intersections of art, technology and culture.

Now we are looking for six brilliant ideas to reanimate our cities post-lockdown by inviting people to play and connect: creative SMEs, artists, designers, architects, technologists and creative practitioners can submit an expression of interest for Playable City Sandbox by Fri 12 Aug, 10:00.

We are very excited to reanimate Playable City and to commission six new prototypes which will be supported by MyWorld’s IDEAS programme.

It has been six years since our last Bristol-based Playable City. Over this time we have focussed on supporting a network of international producers, running developmental labs, reflecting and iterating, and defining what guiding principles we plan to use in our work going forward.

We have brought all of our learning together to launch this latest Playable City opportunity, and we are really looking forward to seeing some great ideas and sharing the projects with you, the people who play…

If you are interested in receiving up to £45k to develop your own Playable City prototype, there are two stages to the call. Stage 1 is an application for an expression of interest for attending an Ideas Lab here at Watershed. The half-day Ideas Labs will run on Thu 8 and Mon 12 Sept. Stage 2, those who have attended an Ideas Lab are invited to apply for a prototype idea.

We welcome applications from all over the world but you will need to be present during the Ideas Lab and Sandbox development period and your work needs to be presented in Bristol.

Find out more about the opportunity, read the Overview document and apply for the Playable City Sandbox here.

Watershed is excited to be a partner in MyWorld, a project led by the University of Bristol that will celebrate the West of England’s reputation as an international trailblazer in creative technology and screen-based media. The Sandbox commissions are part of MyWorld’s IDEAS programme, led by Watershed and funded by UKRI. You can read more about MyWorld here.