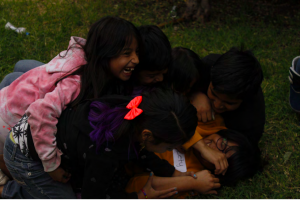 Back in 2017 I had the fortune to start a 3 year-long life-changing journey with 14 other creative producers from around the world: Creative Producers International (CPI), a new global talent development programme led by Watershed. One of the central themes that brought us all together was PLAY, playable cities to be more precise. Thus part of the CPI journey was to discover together the scope of the meaning of a playable city in different urban contexts. Personally, I have always been passionate about cities, people and how their relationship changes between cultures, and have dedicated my professional life to explore, how might we instigate changes to those dynamics through the design of placemaking strategies, participation methodologies, urban prototypes and public policy design.

I was lucky enough to be nominated for CPI and to be part of this amazing cohort as I was leading the action-research strategy named Playful City at the LabCDMX —the experimental and creative area of Mexico City’s government (2013 – 2018). The objective of Playful City was to explore the possibilities of how play and playfulness can reconfigure urban imaginaries and provoke citizens to take an active role in the city-making processes. In particular by designing and implementing different projects and tools to establish children’s perspective as a central factor in urban planning and public policy design. Linking play with children maybe sounds too straightforward but when the urban environment is materializing the adult-centered ways of making decisions – from a perspective of assistentialism and overprotection – resulting in street insecurity, spatial injustice and fenced, private, poor-quality, stereotyped and socially-restricted play spaces, something needed to be done! But after 4 years of working within Mexico City’s government (January 2015 – December 2018), with the change of administration both at the local and federal level, the LabCDMX closed its doors.

As it is my nature, I needed to do something to keep pushing for this agenda, I was too invested, it was too close to my heart and if I was not able to do it from the public sector I was going to do it in any way possible, so I started my own practise: MACIA Estudio, a transdisciplinary practice challenging the boundaries between architecture, experience design and applied research. Together with my business partner we continue to research play and playfulness while designing public spaces, temporary interventions, workshops and experiences to generate meeting places to imagine, inspire and provoke the construction of communities and healthy environments for urban childhoods. To be honest, CPI was my anchor at the time and if I had not been supported and inspired by each and every one of the amazing humans that are part of the program I would probably not have made the jump.

I am back within civil society facing the challenges of the new administration but making the most of my experience from within, from balancing political interests to get decision makers’ attention to bring together a network of people, both local and international, to make a meaningful change in Mexico City.

CPI awarded us a development grant to explore our ideas for making change in our cities. My plan for this grant was to find a space that could be intervened with an playful installation, co-designed with children (and neighbours) to create three things:

I located a fantastic space for the installation – an underused garden-like space between the buildings Campeche and Tamaulipas in the third section of Tlatelolco. (This is a built up area, lacking in open spaces that openly invite children to play). The challenge was to invite children from many buildings and surrounding neighbourhoods to take part in co-design workshops. The main stakeholder was the local government. It all seemed relatively easy, we knew our methodology, we had the permits, we prepared everything and we were ready for our first workshop. But only 3 children showed up… 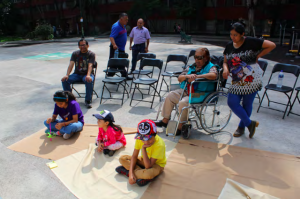 We needed to do something immediately! So, we did what we know best, we set out to play with the children (and their parents!) Gradually, this attracted other children, watching and wondering what weird thing these adults and children were doing together. Although I initially felt defeated, in retrospective it was a fortunate setback.

We re-evaluated the whole strategy and realised we were going to need more time to build trust with the community if we were to achieve the construction of a playful territory for everyone, both physically but also in their imaginations! So, we created Wednesdays of Play, a weekly program of free play, where children are the play masters and everyone is invited to play with the group. It started as a summer one off, but has continued throughout the year.

Yes, we have been playing every Wednesday from 16:00 to 18:00 hours for the past 6 months. It has proved to be quite the commitment, but with the help of the first children – who very quickly understood the dynamics – we have gathered a group of up to 40 children that understand that the underused garden-like space between the buildings Campeche and Tamaulipas is now their playful territory. Furthermore, all neighbours from both buildings and other neighbourhoods (over 1250 people) know about the program and are at least respectful of children’s time and space. 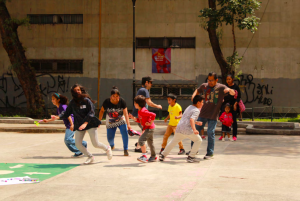 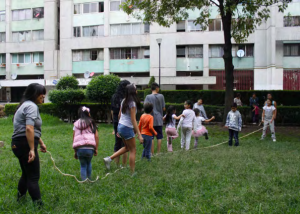 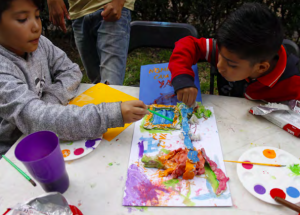 Children help us to invite other children to play and even if they are shy at the beginning, once they feel like they belong to the group, are able to show their full personality, specially when there are no parents around!

Once we had our group and the support from many neighbours we continued with the co-design workshops. One was not enough, and we had to run it many times as many children wanted to take part. Because of this process, their ideas and the observations we made over a 6 month period have now been transformed into a master plan for the whole space. The local municipality is looking for extra funders for the project and they will even include it in their end of year showcase. 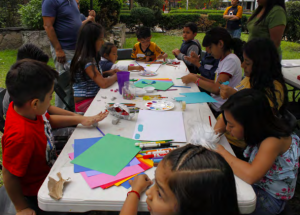 The construction works took a long time to start because the location is protected by the National Institute of Anthropology and History (INAH) and there are many conditions that need to be fulfilled and many bureaucratic permits that were out of our hands. I am delighted that the inauguration of the first urban toy in this space is scheduled for the 21st of December 2019 and construction works for the full master plan will definitely run over through 2020. According to Cuauhtemoc’s major this project will be only the first of many.

Here are some artist renders of the transformed space: 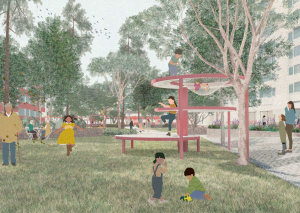 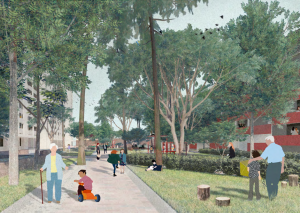 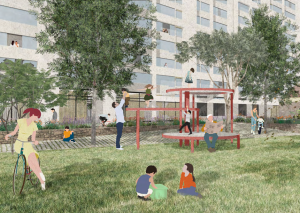 There are many learnings from this particular process. Through the CPI network, I have the support of people from many different perspectives who reassure me of the need for these type of projects and the urgency for creating a wider and more palpable understanding of what a playable city means in the Mexican context. There is still so much to be done, and I accept the challenge!