“Because I believed in myself so stubbornly, the world has no option but to believe in me too.” – Humans of Bombay

In 2016, Nigeria went through a recession following the collapse of the oil price which led to a massive drop in the country’s income affecting the spending power of every single citizen. In the news, it was stated that this is the first recession that the country has faced in over 25 years.  However, having lived and worked in Lagos for most of my life, I feel like I have been living in a constant state of recession.

It is no surprise that my worked focused on trying to figure out “How to Make Nigeria Better”. This need to be a part of a tribe of problem solvers has guided a lot of the work I have done particularly with regards to creating an environment where people can thrive in their every endeavour. 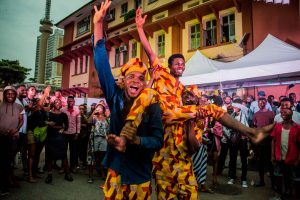 In 2017, the opportunity to join the Creative Producer’s International Programme came at a time when I was strongly thinking about pivoting away from working in the creative sector and going back into mainstream social development work – but I wanted to do it differently. I entered the programme with a bit of skepticism, but guided by a Rumi quote by “Yesterday I was clever, so I wanted to change the world. Today I am wise, so I am changing myself.” I decided that this could be the opportunity I needed to inspire new ways of doing things.

The CPI programme has had an unexpected and powerful impact on my life. It started with me meeting 14 fantastic producers from around the world who will impact my approach to work in a tremendous way. I was not expecting this to be the platform that will leapfrog me into the next phase of my career but it did. I entered the orientation week feeling like I needed to change the focus of my work, but instead, realized that the problem was never about working in the creative sector but my approach to my work. It became quickly apparent from my interactions with my cohort that this was a shared concern and experience, and a lot of us were also looking to do more in our different endeavours. 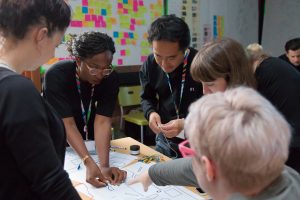 Crucial to the CPI programme was the development grant. An opportunity for all the producers to develop a few of their ideas for city change with the goal to engage an audience in public space. Following my ambition to “do more but differently”, I chose to use my grant to undergo a residency at the Watershed’s Pervasive Media Studio. I needed a neutral space for ideating, prototyping and feedback and my time in Bristol during the CPI orientation convinced me that the studio will be the perfect place for this.

Before I joined the studio, I found that the term “city change” had no specific meaning in Lagos, and I needed to define my own understanding of it to allow me to fully engage with the CPI programme.

I also knew that my work needed to move from focusing on “fixing” big systemic challenges that exist in Lagos, to understanding why people are experiencing these challenges the way they do. So for my residency, I had two objectives (1) develop the concept for a co-design thinking entity and (2) design and prototype our implementation methodology. My strategy for the three weeks at the studio was first about diverging – talking to a ton of people and absorbing as much information as I could and then converging – making sense of all that information. This ended in me not only creating the first pitch document for my business Made Culture, but also the initial methodology for how we will deliver evidence-based projects.

Upon coming back to Lagos, I decided to define “city change” as micro-interventions that allow people to engage with and talk about the changes going on around them. Following this, I immediately set out to find people that will work with me to develop and test out a few of my ideas, but quickly learnt that human-centred design was mostly used within the tech industry and specifically in reference to program design. I decided to further workshop my output from the Pervasive Media Studio in Lagos to understand how to better frame the work Made Culture was trying to do and make it relevant. This was good as it once again iterated the fact that the approach is different from the vision. This meant that we had to simplify the way we described what we were doing from a design consultancy to a project management consultancy that uses a co-design approach to develop and implement solutions.

This was the insight we needed, and we noticed an almost immediate positive response and engagement with people and organizations we were trying to work with. I decided to focus our work on four themes city and urban development, creative economy, tech for development as well as inclusivity and diversity.  Our purpose is to improve the lives of all Africans, and by putting people at the center of our work, we are able to understand the root causes that limit their potential and then develop actionable insights that create opportunities for solutions.

Since its inception, Made Culture has run over eight projects some of which include co-ordinating an urban-community based project in Lagos Island to develop a baseline analysis on the linkages between art in public space and the increase in standard of living supported by the CPI Investment Fund; facilitating a multi-level stakeholder workshop to design a gender-inclusive urban planning framework for the Lagos State Government to carrying out a social audit for a gender-development CSO to strengthen institutional and project delivery capacity; and running on-demand business development training for over 150 social technology-based startups focused on using design thinking strategies.

CPI has been very important to this process from the best practices I learnt from other members of the cohort to the support I received from every member of the Watershed team (Pete, Jo, Clare and Hilary)  and most importantly the funding through The Development Grant which gave me the push I needed to move from idea to prototype and then CPI investment fund which allowed me to move from prototype to minimum viable product.

My hope is to share my experiences and give other producers the opportunity to reach their full potential by running a mini CPI programme in Lagos in 2020.