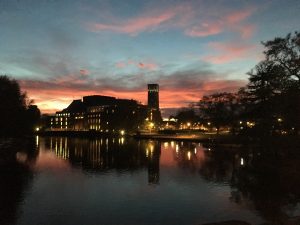 I recently re-read my blog from October 2017, reflecting on the experience of the three week residential lab in Bristol. I’ve been on quite a journey since then and got a new job, still in Stratford, at the Shakespeare Birthplace Trust (SBT) leading their creative programming across the five historic sites connected to Shakespeare and his family, the town itself, and in response to its world-class museum & archive collection. Working with both the RSC and SBT I’ve been actively developing and commissioning work to try and create change in a small town with an international status; a status afforded to it by virtue of it being the hometown of William Shakespeare. Until you visit here, it’s hard to understand how prominent that history and narrative is in the town.

As an example, a few months ago I was showing the artist Tine Bech around the town and talking to her about Shakespeare’s status in the town, and she said it reminded her of a project she had done in Jerusalem – the inference being that our situation is similar to that of the home town of Jesus!

In Bristol we were asked to think about our city change priorities and I identified the need to improve the balance between past, present and future, and local v. visitor in Stratford – trying to find a way to creating a level playing field for everyone to contribute to forging an identity for the town.  It has turned out that being asked to think about this gave me the roadmap to being able to integrate and overlap my personal ethos as a cultural producer with that of the RSC and SBT. Prior to this I hadn’t reflected on what are unfathomable statistics about the balance of local versus visitor population here, or to think about how to redress that balance. Stratford is (uniquely on CPI) not a city. It is a small town. It is home to approximately 30,000 people, but visited by somewhere in the region of 4 million people a year, a combination of domestic visitors, many within an hour’s drivetime, right through to international tourists on very fleeting visits. It has the population density of a city, without the square meterage. The town is full of preserved and restored Medieval, Tudor and Jacobean buildings and the footprint and navigation of the town is largely unchanged since Shakespeare’s day. Many of these old buildings now house upmarket shops, wine bars and restaurants, alongside empty shop units and a growing population of homeless people.  It is very easy to only see affluence in Stratford, but there is poverty and deprivation here too. 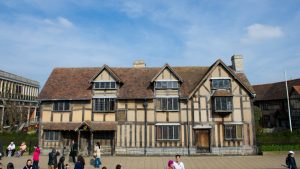 Both organisations have strategic priorities to diversify their audiences and develop closer relationships with local people, particularly those from the C2DE socio-economic groupings. But there’s also an enormous sense that local people are disenfranchised by what they see as a limited cultural offer focussed on the legacy of one former resident – so much so that the very name Shakespeare becomes a barrier to participation, even if the offer e.g. new writing/ family event/ contemporary art exhibition is only loosely inspired by Shakespeare, or even entirely unrelated. In my work I have always tried to bring artists and audiences closer together for meaningful exchange and dialogue about the world we live in, and to create the right, equitable conditions for everyone to participate in these moments – and to do this, increasingly, outside formal artistic spaces. It felt inherently problematic to me, to be doing that in a town where I felt a substantial proportion of local people were at best not interested, and at worse, entirely distanced, from those moments and conversations. Furthermore, participation in CPI has enabled me to fully grasp what enormous potential there is for cultural organisations to spill out of their silos, collaborate for change and contribute to place-making.  The RSC and SBT are powerful organisations, big employers in the town and contributors to the local economy – and therefore both responsible for and brilliantly positioned to do this.

So with all of this in mind, I used the CPI development grant to conduct some research, seeking to discover whether what I felt about the town actually existed, whether the local population of Stratford feel connected to the town’s world-famous story and to what extent they feel empowered to play an active role in shaping the town’s sense of place and direction.  It was quite difficult to agree on the focus for this research, as in Stratford we all felt it important not to ignore ‘the elephant in the room’, i.e. Shakespeare, particularly given the core missions of our two organisations, whereas for CPI it was important this wasn’t something verging on a ‘non-attending’ audience research project. However, by starting with asking people to tell us their stories about Stratford, what they like or don’t like about living here, I think we struck the right balance.  For me, this was not about ‘reaching local audiences’ – it was about creating the conditions for local people to have a voice and agency in a liminal space from which I suspected they felt disenfranchised, with a view to then seeing what we could do next. 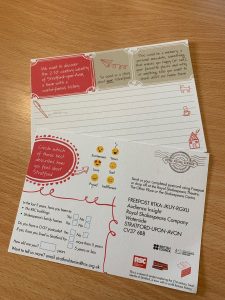 The results indicated a substantial feeling of Shakespeare being ‘for visitors or tourists’ which is backed up by other research, including audience data held by RSC and SBT. Many respondents talked about the town’s decision makers placing more emphasis on the needs of visitors than of residents, and seeing this reflected in problems like traffic congestion, overpriced housing and commercial rents, litter, homelessness, and a lack of facilities and opportunities for young people. I wasn’t really surprised by any of this. What I was surprised by was the significant positivity from respondents, with 71% selecting emojis representing ‘love’ and ‘proud’ when asked to choose one to represent how they feel about Stratford. This was followed by 13% choosing ‘sad’, 6% choosing ‘yawn’ and 4% choosing ‘indifferent’. Scoring lowest, was ‘excitement’, with 4%.  Knowing this sense of belonging and ownership exists amongst local people made me feel very motivated to continue down this path when we were invited to apply for the Investment Fund.

My participation in CPI and the development grant research has also had an impact on the way that I do my job, collaborate with others, and approach programming and projects. SBT opens a new café in the Autumn, and Local Enterprise Partnership funding is supporting a creative intervention in the space; a dynamic digital exhibition platform for local people and local artists, which will allow everyone and anyone to actively contribute to and curate their content, seeking to create a sense of cultural and creative democracy, on the street where Shakespeare was born. ‘Gamestorming’ a book recommended to me by Fred Deakin during the CPI Digital Lab is never far away from my desk, and I use it frequently to give me ideas of how to best facilitate conversations in meetings. Taking inspiration from the CPI labs, in March we hosted an Artist Lab here, to dream up some new projects, with Kate Stewart and I co-facilitating, and with quite a few Pervasive Media Lab residents taking part.  Coming out of that lab are a whole range of exciting projects and ideas for us to develop, so the future is looking exciting, and in more ways than one.