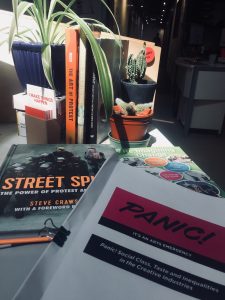 I’m sat at my desk. In front of me I have two different bank notes, hand printed as part of a campaign to wipe out debt by the amazing Bank Job. To my right there are 2 copies of Black Seed, an underground green anarchist newspaper and not far from that is a book called the Art of Dissent, sat atop of a book called the Art of Protest. Hanging from the plant pot on my left is a lanyard with the word ACTIVIST in bold black letters, a keepsake from a week recently spent working at Warehouse 9 in the heart of the Brown Meat Packing District in Copenhagen.

10 years ago I graduated from Art School. An art school that, at the time, was said to be the last independent art school in the country. It’s a university now. One that chose it’s new acronym as NUA, without checking the name of the Adult shop which was just two minutes walk away.

3 years before that I left behind an activist world that had largely defined who I was and where I planned to go. I travelled to protests, I squatted, I dived head first into the world of direct action. On barricades, down half built tunnels, inside leaking tents and in the backs of transit vans. I even went to meetings that were monitored by Special Branch.

For the last 10 years I’ve worked flat out in the arts world. 6 years in Bristol, 4 in Norwich. It’s an arts world that I think is underpinned by a hierarchy of quiet conservatism. A world that I’m a part of. One where a desire for political change tends to dry up when it approaches a point of true sacrifice. One where we often bemoan the impact of gentrification of Bristol whilst simultaneously benefitting from the increase of investment and opportunities that come with it. That’s afraid of acting on the question, “But what if we just tore it all down and started again?”.

Working in the arts has taken me to incredible places and allowed me to spend time with people who genuinely see the world differently to me. It’s been joyful and it’s been really fucking hard at points (not least the time when I had to sleep in an empty factory for 3 months, 3 years into my freelance career). I have Norwich to thank for a lot of the good times, and also the Playhouse Bar. As I worked in collectively run spaces, in a network of DIY artists and musicians, I quickly realised just how much of the activist skills I still had. I used to joke that there’s no better training camp for an aspiring producer than the world of DIY activism and culture. These days, I’m not sure how comfortable I feel making that comparison. The world I inhabit now seems too far removed from the land of old gaffa tape, dusty windows, placards, mic cables and entire budgets kept in tin cash boxes.

Now, after a decade of dedicating myself to making art happen, I’m starting to question the world around me again. There’s something about becoming so familiar with an environment that always inevitably leads me to critiquing it. To prodding and poking at the bit that make me uneasy or that just don’t sit right. I’m not someone who ever really feels comfortable nor am I someone who’s mind ever really rests. These little itches, these questions, have all been brought to the forefront of my thinking and that’s largely thanks to the time I’ve spent on Creative Producers International. The scheme has given me support to think and examine, to research. Together with Alice Holland and Sarah Brin, I became a part of the Coalition of the Annoyed. This led to the founding, with Alice , of the Ministry of Awkward Questions, something that was inspired by something I did when I joined the scheme. A session where I presented the case that art and activism should never be entertwined. Partly to test my brain and partly because there are some projects that linked the two that made me genuinely believe this statement. The slightly naive and potentially arrogant conclusion I came to was that there aren’t really that many good examples of the combination of arts and activism and that, using my CPI development grant, I wanted to create a piece of work that proved it was possible to make a genuine combination of arts and activism that led to an immediate sense of change. One of the first bits of direct action I took part in was an anti road campaign. The woods we defended are still there but are also under threat again. But the project I envisaged became too big and too unwieldy. Whilst doing my research for the project, I began to come across some amazing examples of the places where arts and activism meet. From the Secundaristas in Brazil, who took over their high schools and occupied them for three months before crafting their own unique forms of performance, to Art Lab in Palestine and the inimitable team behind Belarus Free Theatre. I swiftly became aware that there’s a whole world of work out there that I’ve been missing out on. And that I needed to quickly educate myself on what else is out there.

So the next few months are going to see me dive further into this. I’m going to revisit old books and magazines about the anarchist world I used to inhabit. I’m going to visit and immerse myself in projects that are blurring the lines between art and activism. I want to find ones where you can’t put your finger on which is which. Where the line is so tremendously blurred that the first thing you see isn’t art or activism. I want to answer some questions. Can I exist within a world that I am continuously questioning? Does art/activism need an audience beyond the choir of the converted? Can you make work that critiques and questions the world around us without being swallowed and co-opted by the very things it’s trying to critique? How far is too far? Is the edge of too far simply where political change meets our comfort zone? I’ll be making podcasts. And writing more blogs. For now, I’ve got this stack of books and questions to pile through. Thanks for reading.