On 19 October this year almost 200 people from across the world came together at Watershed for our third Playable City conference, Making The City Playable 2017. 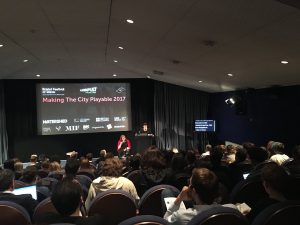 Our previous events inspired valuable conversations about the potential of play and its role in our lives. This year we wanted to move the discussion forward. We have reached a place where play has become a valuable tool, allowing us to break free from the mundane anonymity that can too often define urban spaces. It is being embraced more and more across the world, but there are still important questions to be asked.

“Play is relational and contextual. If those contexts change all of the time, then what does this mean for us and what we need to know?”

You can read more of Hilary O’Shaughnessy’s words here:

Making The City Playable 2017 brought together an international mixture of artists, producers, academics and policy makers to examine how we engage with play in the modern world and look at its potential importance in the future of our cities. It was a day full of lots of excitement, and enthusiastic waving of paper flickers… 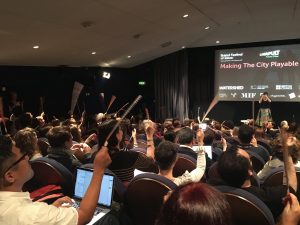 Who Can Play? Our first session asked questions about how play is perceived and who playful interactions are designed for. The wonderfully charismatic Play Scholar Miguel Sicart began the conversation by arguing that our cities are in fact fundamentally unplayable. The concept of the playable city is intrinsically linked to that of the smart city, both designed to create a reassuring sense of order, but both at risk of leaving people behind. Miguel encouraged taking a ‘Faustian gamble’ inspiring collective action while allowing people to play their own way, in the hope of creating new conversations that inspire real change, “If you want to make Playable Cities, go out and see how people play because in the cities there is already play. Our job as makers of playable cities is to let people play, and help them and build play for them, with them” (even if that involves drawing a giant phallus on a moving bridge in St. Petersburg…) Inspiring stuff.

You can watch Miguel’s talk here:

Erin Walsh from Future Cities Catapult shared valuable insight from a city planning perspective. She began with the stark reminder that there is no such thing as a policy for play, but emphasised the value of innovation in planning and placemaking to offer different perspectives on a city and evoke a collective sense of community and self-esteem. Research Magician Stuart Nolan dazzled the delegates with some slight of hand and a rather terrifying looking animal trap, reminding us of the importance of danger and play as an act of rebellion.

How We Play. The next session featured people taking risks to create exciting experiences in a variety of urban spaces. Inua Ellams shared his moving story of creating the Midnight Run and the value of seeing a city through the eyes of those you might not normally encounter. Pascale Daigle gave us an insight into the work of Quartier des Spectacles, Montreal’s cultural quarter, who use art and technology to connect people in shared playful experiences all year round, “Play is a part of human expression and a way to socialise, to learn, to interact, to discover, to reflect and also to have fun.” Their stunning projects ranged from musical swings and benches projecting dynamic installations in the summer months, to interactive see-saws illuminating the streets in the depths of winter (a reminder that if they can continue playing in minus 30 degree weather there is no excuse for any of us!) Daniel Hirschmann shared some inspirational examples from around the world, simple ideas that transformed boring city infrastructure into moments of pure joy. He also gave us an exclusive look at his new project Stop, Smile, Stroll, the current Playable City Award winner which seeks to unite traditionally warring factions of motorists and pedestrians in moments of celebration at zebra crossings. UWE Professor of Design Futures Jen Stein shared some tools from her home city of LA that encouraged playfulness in civic engagement for the benefit of the whole city.

Let’s Play! In the afternoon our delegates were led in a series of playful interventions in a variety of locations across the centre of Bristol. These interventions were designed exclusively for the conference by the cohort on Watershed’s global talent development programme Creative Producers International. Delegates challenged their perceptions in debates around play and cities, reimagined forgotten or obsolete public spaces, experienced an aural journey through the past, present and future and imagined what that city would sound like if it had its own voice. The result was a unique opportunity for everyone to share their own feelings and ideas, while giving themselves the opportunity to meet each other and have conversations. 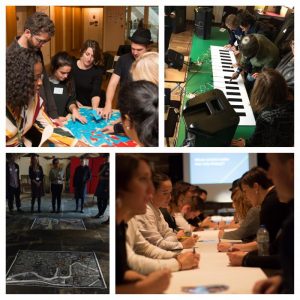 Where We Play. Our final session of the day was chaired by Arnolfini’s new Director Claire Doherty, in conversation with Clorinda Romo from Laboratorio para la Ciudad (Mexico City), Olamide Udoma-Ejorh from Lagos Urban Network (Lagos) and Seiichi Saito from Rhizomatiks (Tokyo) who revealed their strategies for creating work in public space that feels increasingly contested. They spoke passionately about the need for Producers inside and outside of the system to help artists work with officials who fail to recognise their value, but emphasised that often it is just as important to ‘show by doing’ as it is to fight for permission. It was a fascinating exploration into the lessons we can learn from unfamiliar contexts. Perhaps more surprising were the distinctly similar challenges people must face working within very different urban spaces all over the world. 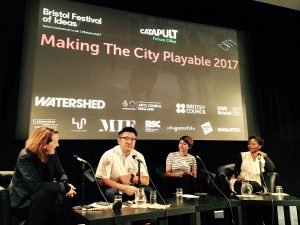 We have had lots of fantastic feedback from the day, from people who felt challenged, inspired and motivated to get out and play, “Thank you for hosting such an inspiring event, for allowing so many creative producers to come together and for providing so much inspiration and knowledge.”

“I’ve not been so excited in a long, long time. Loving @playablecity conference.”

You can read more from our guests here:

So, as play and cities both evolve it seems there are always new challenges to face and different perspectives to be heard. Our next Playable City conference will take place in Tokyo in October 2018. We hope to see you there.

Watch our other speakers from the day using the links below:

Stuart Nolan – The Bite that isn’t a Bite: Danger and Play

Inua Ellams – The Midnight Run: Playing in the City