This summer, Bristol residents and visitors were able to spark up conversations with the city, using nothing else but the humble text function on any mobile phone. As the first winner of the first Playable City Award, Hello Lamp Post provided city dwellers with a new way of communicating through lamp posts, post boxes and other familiar street furniture, by texting the unique codes found on each object.

Over the past eight weeks, the project has received wide recognition in national and international press and led to 25,674 texts messages being sent by participants to everyday street furniture. 3,956 individual players have taken part, with 70 new people joining the conversation every day on average. 1161 objects have been woken up by a text around the city, including over 200 lamp posts and 32 of the 80 Gromit Unleashed dogs, also introduced to Bristol this summer. People of all ages have taken part, from children to the elderly, in groups, and alone. 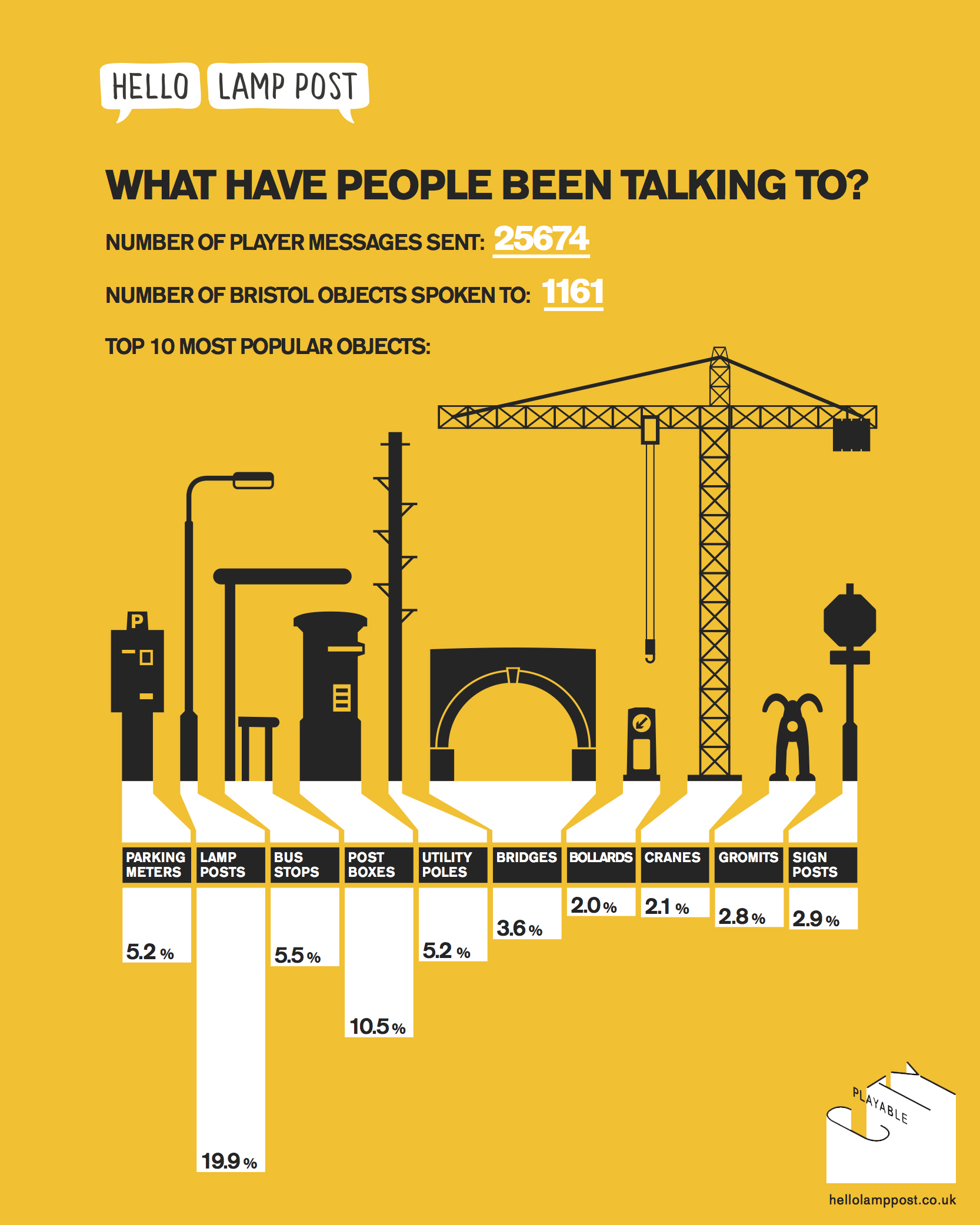 Some of the more unusual objects that have been texted were hot air balloons, graffiti, chewing gum, and on occasion, even living pigeons outside the Crown pub near St Nicholas Market. Examples of conversations ranged from the humorous and charming to the political to completely abstract:

Bridge: “How many strides does it take for you to walk across me?”
Player: “It took one tall human 80 strides and one small human 87-ish! Thank you for helping us cross the water.”

Parking meter: I think something suspicious is going on here. Can you see any clues?
Player: There are two ice cream vans and no customers. They’re probably secret agents.

City Hall: “If you were mayor of Bristol, what would you change?”
Player: “I’d try and change the divide I think there is between the central areas of the city and less affluent areas further out.”

Drain: “What do you think is under your feet right now?”
Player: “Naked hairless humans with massive eyes.”

Ben Barker, co-creator of Hello Lamp Post and co-founder of PAN Studio, said that “The project has been all that we had hoped for and so much more. We wanted to give people of all ages and backgrounds in Bristol a chance to interact with the city, to play with the ordinary and sometimes extraordinary objects they came across every day and spark a conversation. We’ve been overwhelmed with the response and the number of people who took part. We’ve followed the conversations with great interest and it’s been so exciting to see how imaginative people of Bristol are and the conversations that Hello Lamp Post has inspired. We are aiming to present the project at SXSW in Texas next year and hope we can introduce it to other cities around the world.”

Clare Reddington, Executive Producer of the Playable City Award, added, “The Playable City is a new term, imagined as a counterpoint to ‘A Smart City’, where openness and permission to play is key, enabling residents and visitors to rewrite the city’s narrative by being playful in public. This is exactly what’s happened in Bristol this summer and is a sign of things to come in the future. Here’s to many more Playable Cities around the world, and more fun and games for Bristol next year. We can’t wait to kick off year two of the Playable City award later this autumn.”

The details of the second Playable City Award will be announced by Watershed later this year.